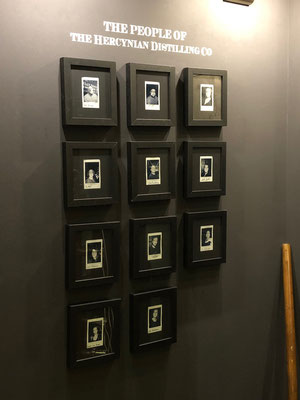 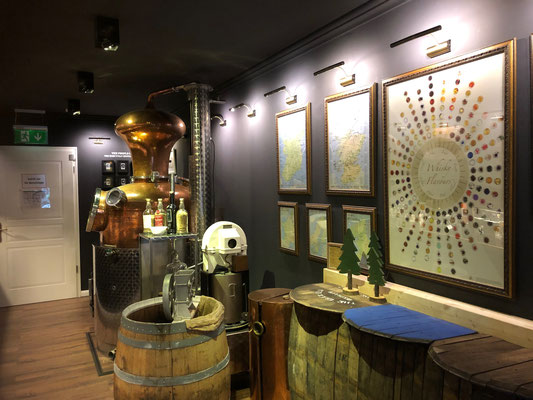 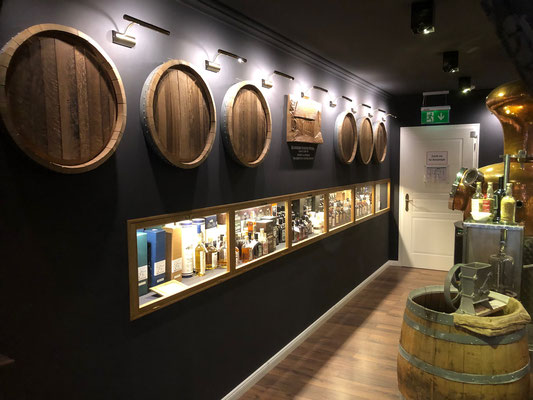 In the small visitor center you can learn details about our production methods. You can find the old (mothballed) wash still in this area.

The first step to produce a Single Malt Whisky is to grind the MALT (malted barley) with a small mill. The grinded malt is called GRIST.

The GRIST has to be mixed with hot water in the FULL LAUTER MASH TUN to begin the MASHING.
The so called MASH has to be heated carefully up to 75°C with the first warter, 85°C with the second and 94°C with the third water. Within this process the sugars will be activated and cooked out of the grist.

During this process the MASH has to be lautered to separate the WORT (liquid) from the DRAFF (solids). The WORT has to be cooled down to 26°C.

After cooling the WORT is filled into large fermenation tanks, called WASHBACKS. YEAST has to be added directly after filling the WASHBACKS with the WORT. The mixture of wort and yeast is now called WASH.

Within the next 96-120 hours the yeast converts the sugars in the wash to alcohol (fermentation).

In the end the wash contains about 8.5%abv.

After the WASH is fully fermented, it has to be distilled with a POT STILL.

Since our Whisky is distilled two times, we are using two different types of POT STILLS: WASH STILLS and SPIRIT STILLS.

The first step is to distill the LOW WINES (from the WASH) with about 25%abv. in the WASH STILLS. 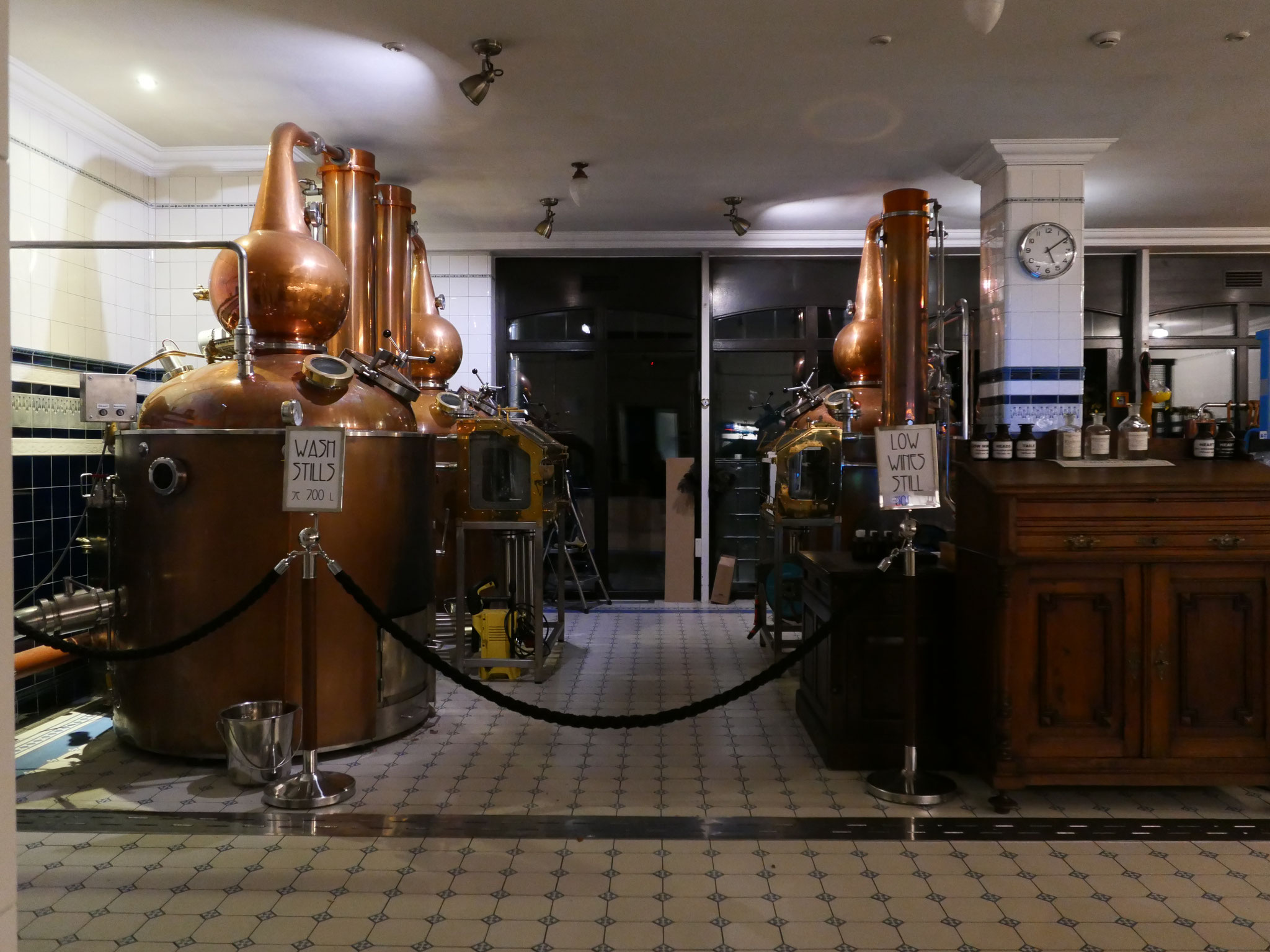 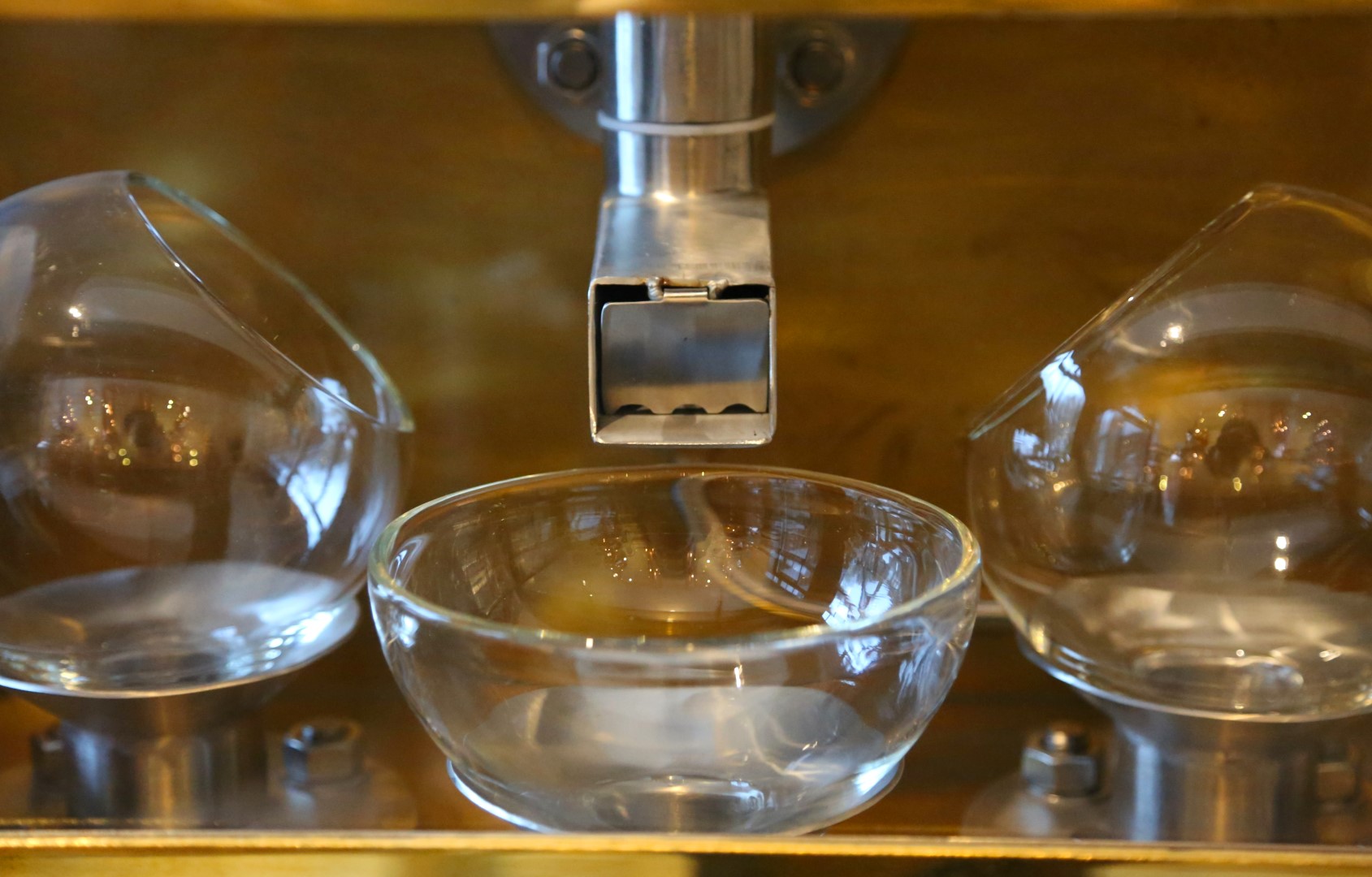 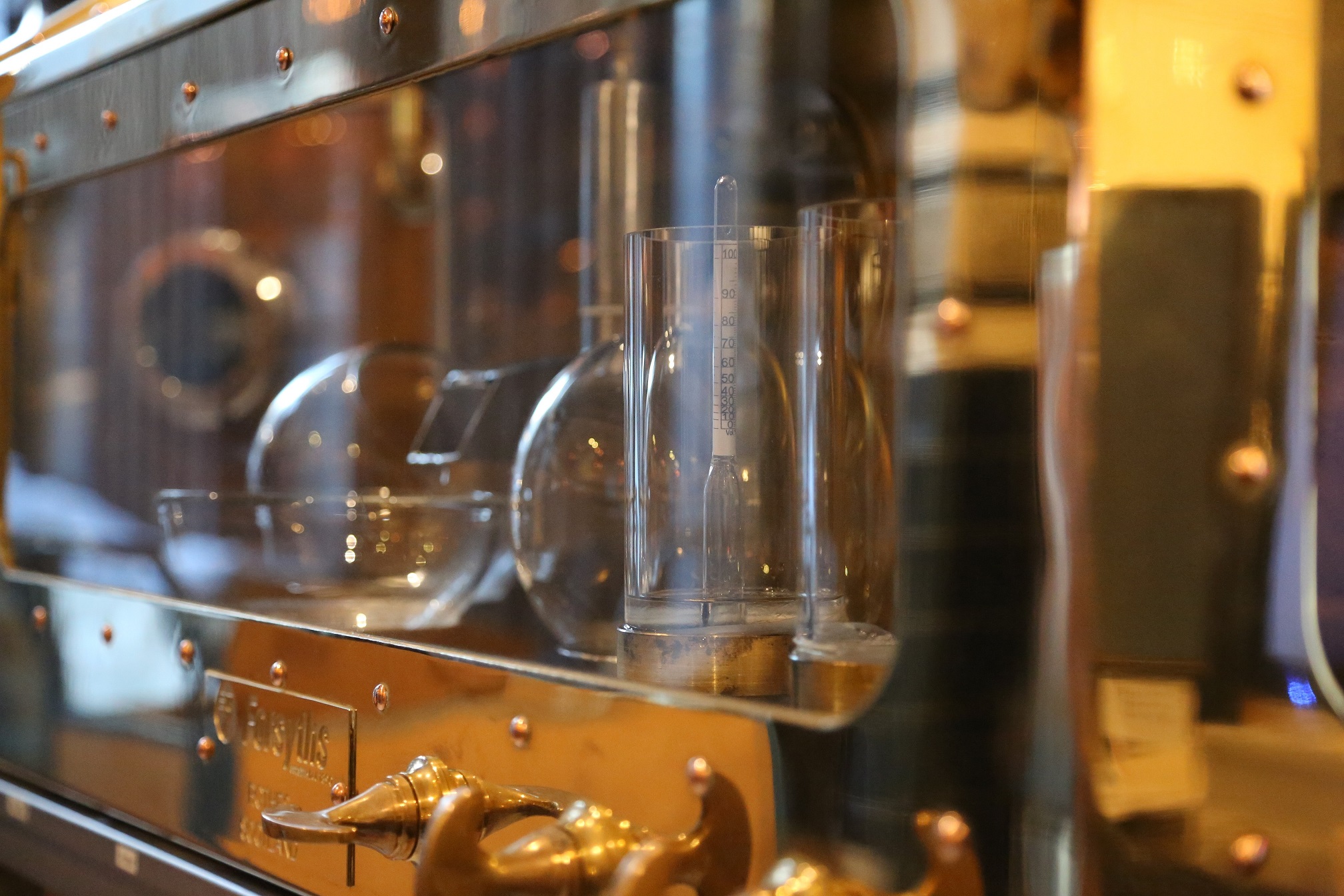 The second step is the most important step to produce a good NEW MAKE (SPIRIT) because it is important to CUT (separate) the run (distillate) into three parts.

The HEAD OF DISTILLING and the STILLMEN decide when to set the cut points between the different phases of the distillation.

The distillation begins at about 64°C with the so called FORESHOTS or HEADS. The foreshots are very light but extremely dangerous alcoholes like methanol, acetone and esters. They run till a temperature of ~78°C and a strength of 75-77%abv is reached.

The foreshots are followed by the MIDDLE CUT. The middle cut or HEART of the run is the most important part of the distillate because it will become the future whisky. The middle cut contains important aromas and has about 70%abv in the end.

At about 83°C we reach the most difficult part of the distillation: to set the second cut point extremely precise because the most aromatic part of the HEART and the so called FEINTS or TAILS will leave the still sometimes just seconds after another. The second cut point depends on the type of new make (smoky or not) and is set at about 60-68%abv.

The feints contain many long-chained and heavy alcohols like isopropyl and butanol which are neither suited for consumption nor tasty.

The last step to produce a whisky is the MATURATION.
A whisky has to be matured at least 3 full years in wooden casks. The casks must not be bigger than 700 l volume.

Because the cask affects the whisky to about 70% only the best casks are used for the maturation of HERCYNIAN SINGLE MALT WHISKY.

The warehouse of HERCYNIAN DISTILLING Co. holds a large variety of different cask types, the casks were previously filled with (fortified) wines like Sherry, Port Wine, Madeira, Marsala, Malaga, Rivesaltes, Claret, Banyuls, Sauternes, Tokaji, Jurancon or Amarone (and many other) or destillates like Rum or Cognac.

After one or some casks are fully mature, rich flavoured and perfectly smooth they can be bottled.

The first decision is to add water or not. Most of the special bottlings and especially SINGLE CASK bottlings are bottled so called CASK STRENGTH (45-65%vol.) without adding any water.

CORE RANGE bottlings like THE JOURNEY are bottled with 43%abv by adding fresh spring water before the bottling process.

Please note that THE HERCYNIAN SINGLE MALT WHISKY is always NON COLOURED (no spirit caramel is added) and not only NON CHILL FILTERED, it is completely UNFILTERED to gain the perfect aroma.

Every single bottle of HERCYNIAN SINGLE MALT WHISKY is unique because it is bottled, corked, sealed and labled completely by hand.

In the distillery shop you can find and taste everything which is produced at the distillery. From the Core Range bottlings like THE JOURNEY to SPECIAL EDITIONS or even DISTILLERY EXCLUSIVE bottlings the distillery shop holds a large variety of different bottlings. Beside the Single Malts you can also find tasting-glasses, bar towels and many other products like the heritage collection liquors: Herbal Liquors, fruit based spirits,...

In the shop you can find THE HERCYNIAN TASTING BAR where you can taste the Single Malts and other products. 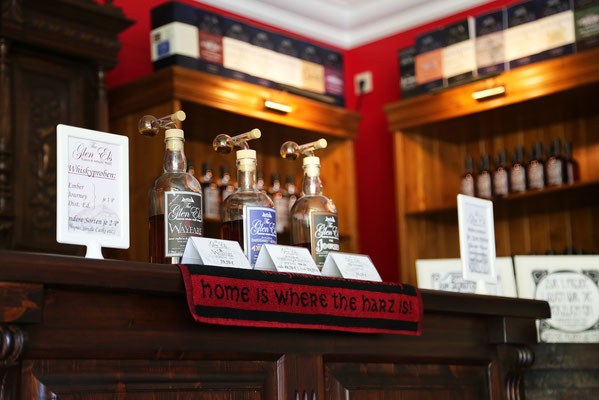 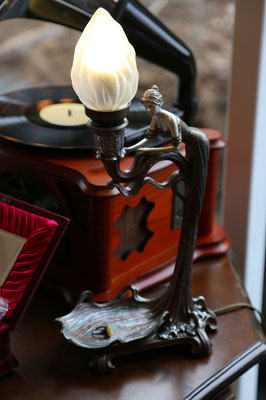 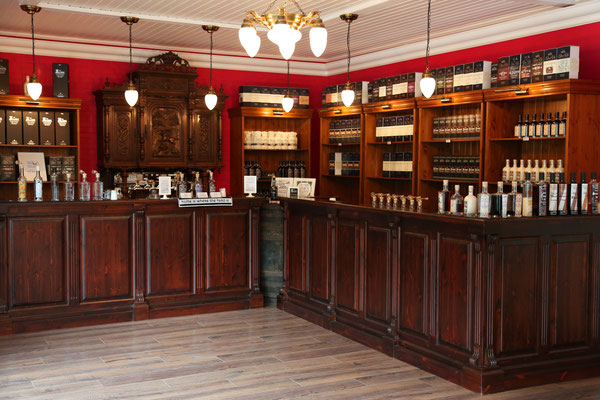